Who needs paid-for comic making apps or subscription services to online comic creators? With any smart device, installed with the Google 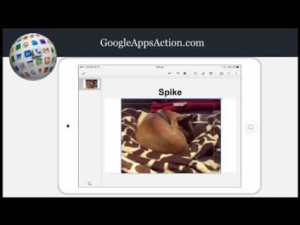 Slides app, you can now quickly and easily create your own comics on the go! You will need the latest version of the Google Slides mobile app, which now allows you to add your own pictures and photos.

Still not convinced? Have a look at the short video below where I demonstrate exactly how to do it on an iPad Mini in less than 3 minutes (it will work similarly on an iPhone or Android tablet or phone). Thanks to Mike Petty who gave me the idea during a presentation he made during a Google Education on Air session.

The tutorial co-stars my puppy, Spike, who patiently slept the whole afternoon while I made the video.